One of the best parts of buying a house, especially a house formerly owned by a gardener, has been to find perennials coming up in the backyard.  There aren't a ton of flowers (the former owner took out a lot of her flowers as she got too frail to take care of them), but I've been taking advantage of what there is.  We've also planted many of our own flowers.  I'm finding more and more that one of my greatest pleasures is picking flowers from my very own garden, and arranging them.

We had a small anniversary party on our back porch this weekend, and so of course I had to add a bit of a floral touch.  Husband took these pictures for me. 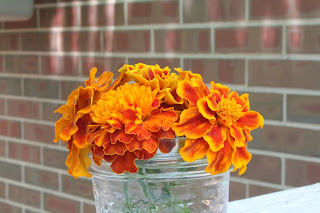 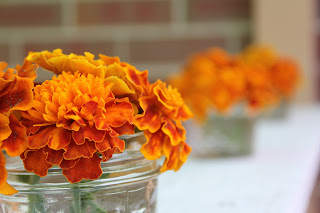 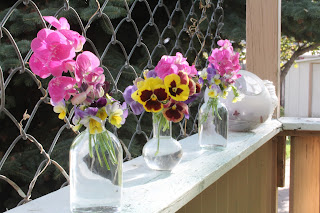 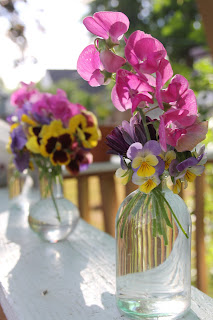 I haven't quite figured out blogger's new formatting, until I do, things may look a little strange.
Posted by Kristina at 12:27 PM 7 comments: 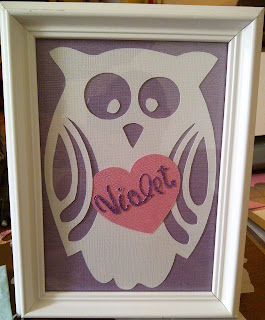 After a long break from craftiness, I've finally started to get back into it.  For Christmas, Tyler got me a Silhouette!  I've wanted one for a long time, and now that I have it, I'm full of ideas again.  I made this little owl picture for my niece's first birthday.  Of course, she's too little to appreciate it now, but maybe someday?  In the meantime, I hope my sister-in-law likes it.

Everything, except for the letters (they're stickers), was cut out using the Silhouette.  I think it's one of the most useful crafting tools that a woman could ask for.

Posted by Kristina at 2:57 PM No comments:

*Disclaimer: This post is long and contains no pictures.  I think you should read it anyway.

Before I met Tyler, before guys I dated in college, before my first boyfriend in high school...I was having a love affair with chocolate.

It must have started around the time that I could eat solid foods, although I don't remember exactly when that was. For as far back as I can remember, it was a house rule that we could have two cookies for dessert after supper.   These weren't just any cookies.  They were my mom's homemade chocolate chip cookies, which as chocolate chip cookies go are among the best in the world.  The cookie tin, with a smiling teddy bear on the lid, was kept in the cupboard, and resupplied when ever rations were low. What's a kid to do when her very own mom makes the best chocolate chip cookies in the world? Eat two after dinner.  Every night. For most of my childhood.  And I learned that dinner was always supposed to be "capped off" with a sweet treat.

Of course as a child I ate more sweets than just two cookies per day.  It's no secret that American kids find sugar everywhere everyday.  Eating copious amounts of chocolate mattered a lot to me.  But not in the way it should have.  It mattered emotionally, not physically.  I could self-medicate my depression with chocolate as much as I wanted without gaining weight.  Until I hit age 25, I never weighed more than 118 lbs (and was usually more around 105).

As I grew up and became more educated about health, I started rationalizing my sugary habits.
-I eat lots of healthy food, so it doesn't matter if I eat a lot of chocolate too.
-I almost never eat fast food.
-I NEVER drink soda.
-I almost never eat anything sugary if it doesn't have chocolate (thus eliminating quite a few calorie sources)
-I'm almost completely vegetarian.
-I exercise several times a week.
-I'm still too skinny.

And yet somehow, in spite of my "healthy" lifestyle, I started gaining weight sometime after 26.  And it wasn't cool.  On this blog I've already talked about some of my weight struggles, so I won't go into huge detail.  Suffice it to say that my heaviest was just too heavy for my 5'2" frame.  I hated looking at myself in the mirror, and didn't want to see any pictures of myself.

Finally I cut down (notice I didn't say "cut out") on my rationalizing and started working on the trouble areas.  In July of this past summer, I started doing P90X workouts with a couple of friends.  When the school year started, our new principal happily surprised the staff by arranging for us to be able to work out for free with a boot-camp style training organization called Camp Gladiator. So I started working out with them twice a week, and I'm happy to say that I love the workouts and I've kept it up.  I also do a combo of walking and jogging everyday.  But increasing my exercise only decreased my pounds by 7 or 8, and I wanted to lose more.

I realized that I was only going to lose more by changing my diet.  You see, I was still rationalizing..."Since I exercise SO MUCH I should be able to eat whatever I want."  Sadly, this just isn't true for me. I can't eat as many healthy foods as I want, exercise as much as I do, and eat the amount of chocolate I was eating and still lose weight.  So about 15 days ago I decided to see what cutting out sugar for a month would do for me.  10 days ago I stopped eating chocolate, and other sugary sweets. Originally the plan was to cut sugar completely, but I realized that wasn't going to work.  Not right now anyway.  So I decided to cut anything that looked like, or could be confused with dessert.  And I'm down 2 more pounds.  To be fair, I lost some weight while I was sick a couple of weeks ago, and the 2lbs are actually just pounds that I didn't gain back after being sick.  Still, that's something.

Aside from wanting to lose weight, there's another reason that it's important for me to at least temporarily sever sweets.  I realized that my dependency on them was absolutely real.  And it's kind of ironic that this dependency has been in place for most of my life.  About 3 years ago I started taking medication for anxiety/depression.  The medication helps SO MUCH, and yet I kind of hate that I'm dependent on a pill to help me have normal emotions.  So, if I'm bothered by taking a pill that actually really helps, how can I not be bothered by a dependency on sugar...which really doesn't help or increase my health?

And so it's been 10 days; which is about 5 days longer than I've ever gone before.  I plan to go until February 7.  We'll see what happens after that. 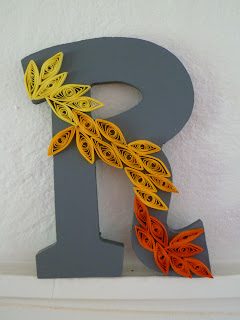 Yesterday I had a sudden urge to craft.  I have a small obsession with grey and yellow right now, and I also love ombre, so I wanted to put all that together.  I came up with this semi-quilled monogram.  This was a super easy project.  I painted the R grey, quilled a bunch of marquis, and mod podged them on. 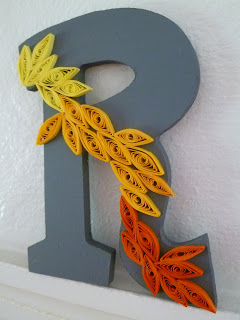 Unfortunately, these colors don't go with anything in our house.  So, it'll probably go in my classroom when school starts.

A couple of weeks ago I had the pleasure of arranging the wedding flowers for my dear friends, Thai and Robert.  Thai chose four lovely shades of purple carnations, and lavender roses. 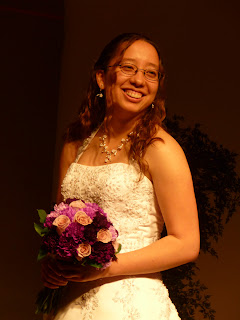 Here, I'm holding my bouquet against my dress.
I had the honer of being the matron of honor. 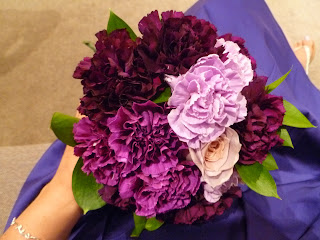 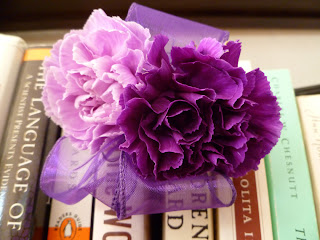 Husband's boutinnier is on the left.  He was the best man. 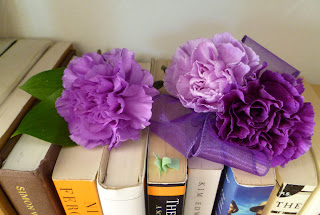 Another shot of my bouquet. 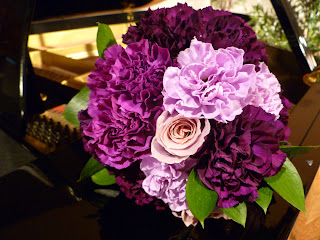 A final shot of the bride's bouquet. 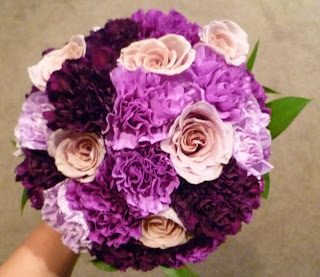 It's always hard to get good pictures, or any pictures at all, when I'm in the wedding party.  But it's also always a joy whenever I get to work with flowers.

Two weeks ago I became the full-time 5th and 6th grade teacher at my school.
I wanted to make a gift for the students, and the classroom. 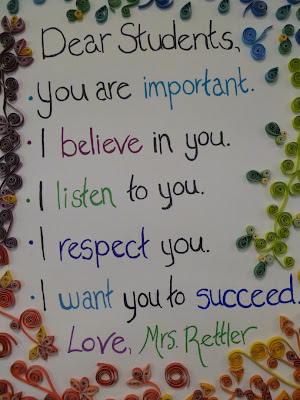 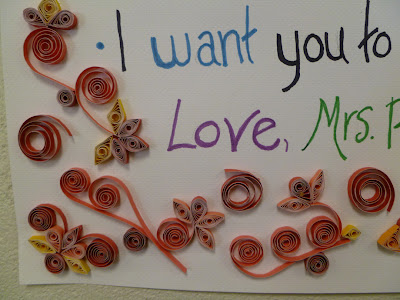 So I came up with this giant, quilled poster. 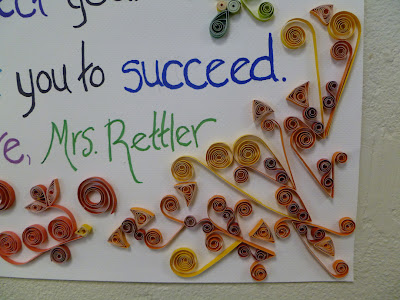 It was a lot of work since I had to cut all the strips.
They are thicker than the usual 1/8th width of quilling paper. 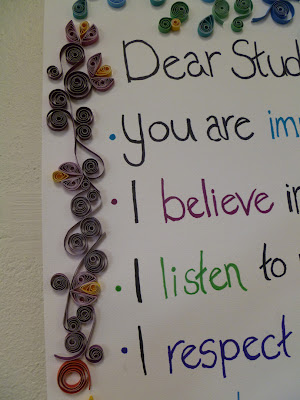 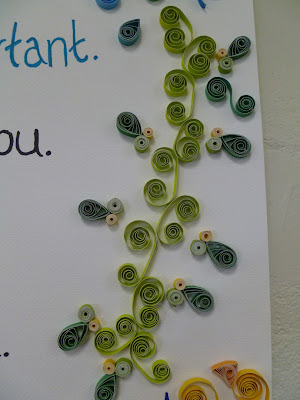 So now it hangs proudly in the classroom.
The students think it's pretty cool. 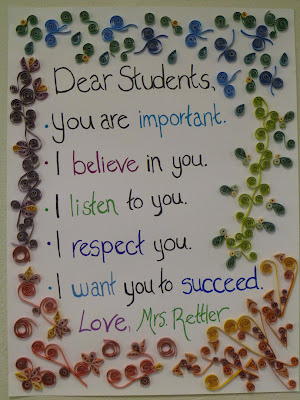 The next step is to get it framed.
Posted by Kristina at 6:05 PM 14 comments: